Whilst the initial impetus came from staff, students and members of the Woolwich Polytechnic, the strength of the Lodge has come about by current members recognising the need to include people from all professions and occupations. 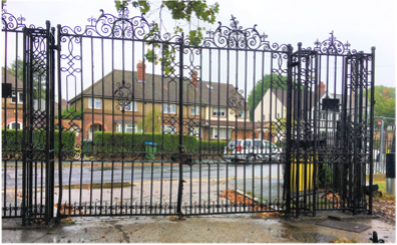 At the end of the 2nd World War, members of the Woolwich Polytechnic Athletics Club commissioned the building of The Woolwich Polytechnic Memorial Gates to commemorate those ‘Poly’ men who had given their lives.  The gates were to be erected as the main entrance to the sports ground and were completed and erected in 1948.  As was agreed, the gates had only plaques with dates of the two wars, there was not a plaque on the gates of the names of those who had given their lives. The plaques giving the names of the 60 who died were made and placed in the Calderwood entrance of what was then the Woolwich Polytechnic College in Woolwich.

The sports ground was used by the Polytechnic boy’s school and students of the college. It had a number of football and rugby pitches a cricket pitch and tennis courts.  Personally, as an old Woolwich Polytechnic student, I considered the sports ground, and the pitches were kept in excellent condition.

In July 2007 the Blackheath Rugby Club, (which incidentally is still formally registered as The Blackheath Football Club), signed a 25 year agreement with the University of Greenwich for the long term lease of the Woolwich Polytechnic Sports Ground where they now play all of their home matches.  Over the last few years, as a result of Lodge members and, in particular, W.Bro. Dave Tickner’s association with the Blackheath Rugby Club the Lodge has held Annual Remembrance Day services at the War Memorial Gates (the main entrance gates to the sports ground) where, during the Armistice Day services, they laid wreaths on behalf of the Woolwich Polytechnic Lodge and the West Kent Province. 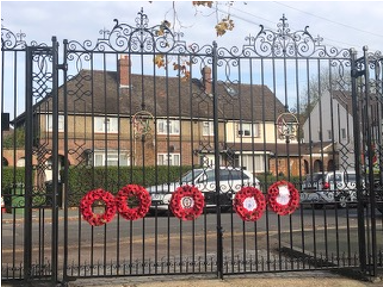 As the Remembrance Day Services continued it became very noticeable to those taking part that the Memorial gates were beginning to fall into a serious state of deterioration and needed major refurbishment.  The paintwork was flaking off extensively due to rust, original parts of the gates had somehow been broken and disfigured, one part apparently when a tree fell on the gates!  One of the main pillars with hinges had become so deformed that it was impossible to properly close the gates and they could only be pulled together and held with a metal chain and large padlock.

Whilst the project looked quite daunting, members of the Poly Lodge under the supervision, tutelage, and guidance of W.Bro. Dave Tickner took up the challenge.  It was important to our Lodge to restore the gates to their former state that gave proper prominence to the fallen of the two World Wars and have them ready for the Remembrance Day Service to be held on 8th November 2020.  From August to October the Poly members spent as much time as they were able during the week and at weekends, scraping off the old paint and repainting them, bending the deformed parts to enable the gates to close properly and even welding parts that were either loose or needed to be added.  Temporary walkways were erected to enable the ‘volunteers to carry out the work on the higher levels of the gates.  Members did not have to have the necessary skill but just be prepared to follow instructions and advice!  Those members who were unable to undertake the physical work played their part by delivering welcoming sustenance, generally doughnuts and sausage rolls.

To this end the gates were restored to their former glory, and the two plaques with the two World War dates had the dates repainted by hand in the original colours, gold edging and the colours of the Woolwich Polytechnic Lodge, claret gold and green, were added on the gates stylised logo.

The work was finally completed on Saturday the 7th of November and the Remembrance Day Service held on the 8th! 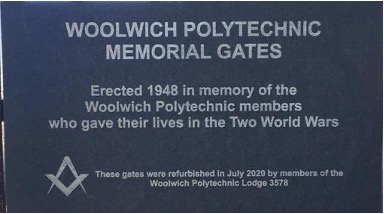 Contact was made with the War Memorials Trust (WMT) and the Imperial War Museum (IWM), both of which hold written records of the Woolwich Polytechnic Gates but did not have any pictures and requested copies of the photographs.  Pictures of the refurbished gates have been sent and will appear, for the first time to anyone enquiring about them on the IWM site.

With the gates refurbished further thought was given on adding a suitably worded plaque on either side of the gates.  The plaques were to provide to members of the public and people using the sports facilities details of when the gates were originally erected and, in particular, why.  It was agreed that both plaques should be made using slate; these were made by a local engraver, Martin Worrow (A member of the Blackheath Rugby Club) and attached to the gates earlier this year (2021), the inscription on the plaques reads:

Rededication of the Woolwich Polytechnic Gates

In 1998 A new plaque showing the names of the 60 (seven had since been added through painstaking research) who lost their lives was produced and placed in what was the old Polytechnic College in Woolwich (by then the University of Greenwich).  On November 11th, 1998, on the eightieth anniversary of the signing of the Armistice that closed the Great War there was a re-dedication service held in the Calderwood entrance of the college, where the new plaque (designed by Professor Peter Doyle, made in Welsh slate), with the seven additional names, was placed.  The late Chancellor of the University of Greenwich, Dr David Fussey, Professor Peter Doyle, the Rev. Lou Grade (University Chaplain) and many other luminaries being present. 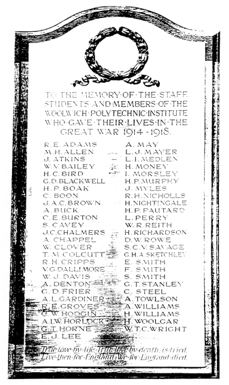 Copy of the original Plaque 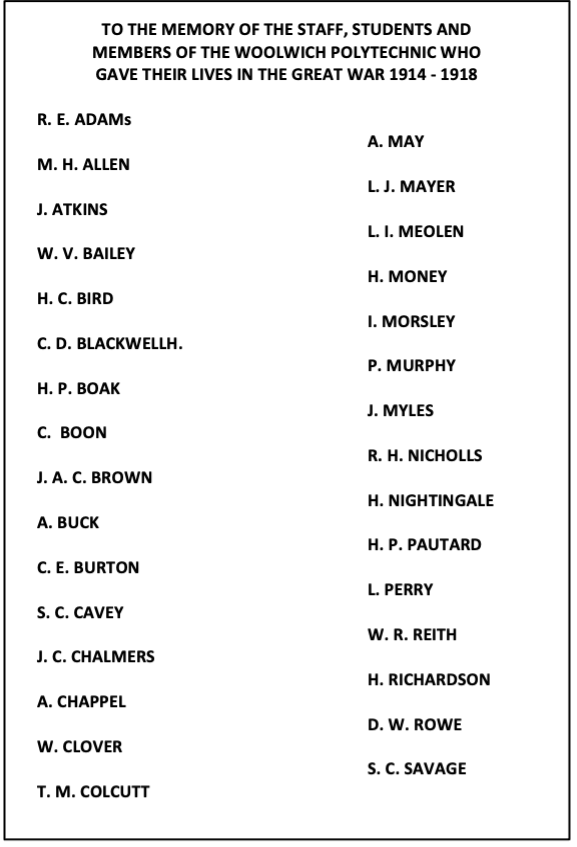 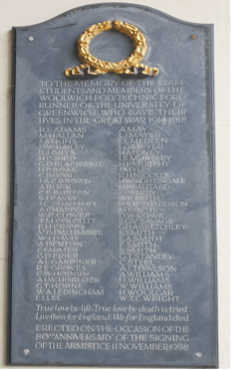 Assistance Required of the Provincial Grand Lodge of West Kent

After the refurbishment of the Memorial Gates and the addition of the information plaques, Lodge members discussed how we might, once again, show our heartfelt appreciation of the sacrifice those Woolwich Polytechnic men had made.  We decided that as the 75th anniversary of the gates occurs in 2023 this would be the most appropriate year in which to hold a Rededication Service to be held on Remembrance Day.  We discussed our proposal with W.Bro. Ray Armstead, who has agreed to officiate at the Service where the names of all the 60 of the First World War, together with the names of a further seven Woolwich Polytechnic servicemen (see the Note below) who made the ultimate sacrifice, in the Second World War, will be read out.

It was further decided that, if it were possible, as the men had been ‘local lads’, any living relatives might like the opportunity to attend the service.

Recognising that our intention requires considerable research and communication, possibly using both local and national press, Provincial Communication, and also social media, we are now seeking both the advice, assistance, and support of the Provincial Grand Lodge of West Kent and other sources.  A small team of Woolwich Polytechnic Lodge Members has been set up who would be very happy to work alongside our colleagues from the Province of West Kent and other interested organisations and individuals to achieve the successful outcome of this project.

If anyone knows of other lecturers, teachers or students of the Woolwich Polytechnic who have gave their lives in the 2nd World War or other conflicts, we would be pleased to know their names and other details.

I would like to offer my grateful thanks to the following for their help on this project:

Albert Patrick, General Manager, and his team at Blackheath Rugby Club, who gave their back up and support

William Robley, Archivist at The University of Greenwich, who found additional documentation and photographs

W.Bro. Dave Tickner, Woolwich Polytechnic Lodge who first proposed the renovation of the gates and led the project to restore them. And finally,

Members of The Woolwich Polytechnic Lodge 3578 who all volunteered to give up some of their free time to carry out the actual renovation.

And now we need to move on to the next phase!