The Lodge was opened in loving harmony at 7:05pm at St Nicholas Lodge 1676, 28th January 2020.  W Bro Steven Kirtley, ProvAGDC was admitted to the Lodge and informed the WM that W Bro Alasdair Watson, APGM had requested permission to enter the Lodge.  The WM Roger Bishop was kind enough on this occasion to allow him to do so and indicated that he would be welcome.  W Bro Watson was admitted, introduced to the WM and Brethren present.  He was introduced personally to the WM who in turn offered the gavel.  W Bro Watson respectfully declined the offer stating that he was sure he would be told off by his DC if he had taken it.  W Bro Watson was seated, and the brethren called to order to salute the APGM with Five.  The brethren were then asked to salute all Grand Officers present with Three, the APGM thanked the brethren for their greetings and salutations on behalf of himself and the Grand Officers present.  The normal Lodge proceedings resumed with the reading of the minuets.  W Bro Ian Richardson then presented Bro Lee Callaghan with his Grand Lodge Certificate with explanation of the same.   This was followed by the presentation of two Past Masters Jewels, the first to W Bro Alan Tait for his three continuous terms in office.  The second was a bar for W Bro Ian Richardson’s second term some 20 years apart.  We also had the presentation of our refurbished Centenary Jewel to the Worshipful Master for safe keeping on behalf of St Nicholas Lodge No 1676 on the Register of UGLE.

The Lodge Business for the evening being progressed, W Bro Alasdair Watson APGM, requested that W Bro Steven Kirtley, ProvAGDC take W Bro Alan Eadie, PJGD to the centre of the Lodge.  W Bro Steven Kirtley called the brethren to order and asked them to form a square around the Lodge.  W Bro Alasdair Watson, APGM, W Bro Roger Bishop WM and Bro Trevor McBean (Secretary) were requested to enter the square and stand opposite W Bro Alan Eadie.  W Bro Watson requested that the Secretary read the Certificate in open lodge which he proceeded to do.  The Certificate was then handed to W Bro Alasdair Watson who presented the same to W Bro Alan Eadie.  W Bro Watson congratulated W Bro Eadie on his achievement and was able to give a brief outline of some of the aspects of W Bro Alans Masonic career which include the dates of him joining St Nicholas Lodge through to his current rank within UGLE.  It was clearly obvious that W Bro Alasdair had done his research before the presentation and was able to divulge some interesting facts with respect of his masonic career and publications.  Not only has W Bro Eadie been a member of the Masonic Philatelic Club since its formation and gave regular lectures. He is also a Life Member of the Mark Token Collectors Club, a Founder of the Jewels of the Craft Study Circle.  His early and continuing interest in masonic research saw him become a member of the Quatuor Coronati Correspondence Circle way back in 1965.  He has received several awards for his work including the much-converted Norman B Spencer Prize Essay Competition sponsored by the Quatuor Coronati Lodge No 2076.  The subject of the Essay was the secretive “Knights Grand Cross of Jerusalem based in Newcastle upon Tyne”.

W Bro Alan thanked W Bro Alasdair for his kind words and observations and was escorted back to his seat by W Bro Steven.  W Bro Steven then at the instruction of W Bro Alasdair call the brethren to order and led a salute to W Bro Alan Eadie with Three.  The WM and APGM were then escorted back to their seats after which the brethren were requested to do so.  W Bro Alan stood and thanked the APGM, WM Officers and brethren for the presentation and salutation. 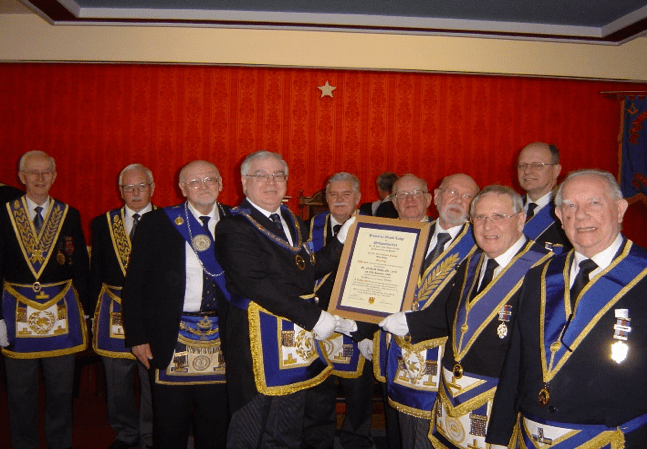 W Bro Iain Howland of the Lodge Paisley St Mirren’s No. 129 on the Roll of the Grand Lodge of Scotland presented his cousin W Bro Alan with a Scottish 60 Year Jewel.

The Lodge then concluded their normal proceedings with three risings and finally apologies for absence. On this auspicious occasion W Bro Steven Kirtley asked the brethren to stand and allow the W Bro Alasdair Watson APGM to retire but that he would see us at the Festive Board

The Lodge was closed in loving harmony