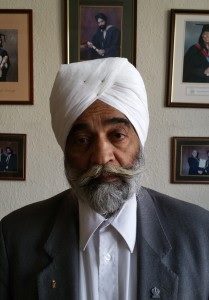 Worshipful Brother Sewa (Fred) Singh Nandhra, apart from his Masonic duties, has also devoted his time to his community and has been awarded a BEM (Medallist of the Order of the British Empire) in this year’s New Year’s Honours List.
Worshipful Brother ‘Fred’, who is a Past Master of Sidcup Lodge 6552, said: “Thank you to all our supporters and volunteers.”
He received the award for his humanitarian service to the whole community and continuous commitment to helping those in need, regardless of their race, caste, creed or religion.
Originally born in Kenya, of village Pattar Kalan, Dist. Jalandhar, Punjab, he accepts the award on behalf of all of the supporters and volunteers. He said: “I offer my sincere appreciation and thanks to my nominees. I dedicate this award to my family, parents, citizens of the whole village of Pattar Kalan, friends and foes alike.
“May the God grant his grace to me, adorn me with every moral and social virtue so that I may continue serving the community at large.”
The official citation said he got his award for services to the community particularly in Woolwich.
It read: “Whilst working as a Principal Building Control officer with the local council, he devotes much of his time for the community’s betterment. He works tirelessly, actively promoting equal opportunities, social inclusion and welfare including worldwide missionary activities with the Khalsa Parcharak Jatha International, and United Nations.
“He has contributed enormously to the communities within Europe and southeast London far beyond his role as President of Ramgarhia Sikh Association Woolwich (RSA). Due to his efforts the centre is now fully occupied seven days a week by people of all ages and carries out more than 750 events annually. These include daily services, free snacks and meals and regular health care, lectures, music and other workshops and family functions along with a sports centre and school for children improving early learning and a centre for the elderly citizens. He has also helped to host and finance community cohesion functions such as multicultural fairs, and sports competitions.”
The whole Province of West Kent send him “Our hearty congratulations”