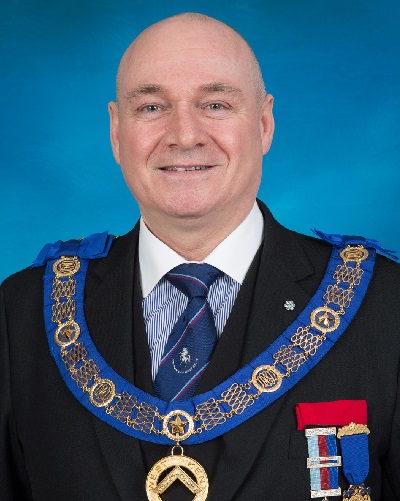 Mark was initiated in the Universal Lodge No. 8219 in December 1993 and became the Worshipful Master in 2000. He has held several offices within the Lodge including Mentor, Assistant Director of Ceremonies and Treasurer. He is a subscribing member of four Lodges within the Province viz., Universal Lodge No. 8219, North Kent Masters’ Lodge No. 9062, Fiennes Cornwallis Lodge No. 9279 and the West Kent Masters’ Lodge No. 5778. Mark is also waiting to become a joining member of a London Lodge (Fitzroy Lodge No. 569).

Mark is a Freeman of the City of London, a member of the; Worshipful Company of Security Professionals, the Honourable Artillery Company and the MCC (player membership). He is also a Mark Mason, Greenwich Chapter No. 332 and a member of the Ancient & Accepted Rite (Rose Croix), Westwood Chapter No.764 & Kent Chapter No. 1071.