On Monday 15th May the members of the White Horse of Kent Lodge were pleased to welcome the PGM, RW.Bro. Mark Douglas Estaugh, the group one APGM, W.Bro. Mark Eyles-Thomas and several Provincial officers to their 199th Regular meeting to present a 60 year citation to W.Bro. George Robert (Bob) Bennie, the primus master and senior founder of the Lodge.
Following the presentation of a Grand Lodge Certificate to Bro. Dan Burn by the PGM and a demonstration of the First Degree by the officers of the Lodge the presentation of the citation began. 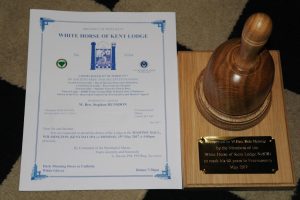 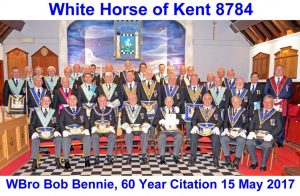 The PGM related some of the things in history from 60 years ago before going on to reminisce on W.Bro. Bob’s masonic history since he was initiated in March 1957, into the West Wickham Lodge No 2948 by his father and uncle, including that he was in eight masonic orders and had achieved Grand rank in six of them and was of course a holder of the Invicta award. The PGM reflected on Bob’s non-masonic history, especially his being a member of bomber command and his regular attendance at the ceremony of remembrance, proudly wearing his late father’s George Medal. W.Bro Ted Webb then read the citation and the PGM then presented this to W.Bro. Bob along with the 60 year pin which was received with a standing ovation by all present. W.Bro. Bob then thanked the PGM and assembled Brethren in his usual short way. The WM, W.Bro. Steve Dunsdon, then presented a masonic gavel and stand suitably engraved to W.Bro. Bob to mark this anniversary and Bob’s contribution to the Founding and continued success of the Lodge. For once W.Bro. Bob was speechless and just thanked the Lodge. 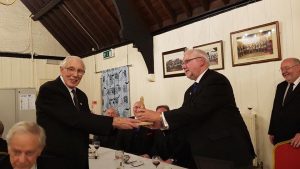 At the following festive board, after the reply to the toast to Master, W.Bro. Bob presented the gavel to the W.M. to be used by him and all future W.M.s to keep him in the Lodge members’ memory.